Well we may have found our perfect boat.  She is a Jeanneau 49 DS called Exotica and we had to return to Mallorca to find her.  She has all the equipment we have been looking for and is in beautiful condition.  More about that later.

We spent a week in Barcelona.  Despite a good look and even a sail on Ulises, it seemed to us that there was just too much work required on the boat and it simply wasn’t worth it.  So it was back to the internet, although we felt we had exhausted all the options in this part of Spain and that France or Portugal beckoned. 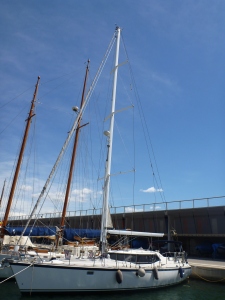 However an English broker website came up with a couple of options so we stayed on in  Barcelona for another three days and took a good look at a Wauquiez 48.  This was too old and definitely not for us.

However the other option seemed much better but the boat was in Mallorca and unknown to all the local brokers there. So another cheap flight and we were right back where we started from. 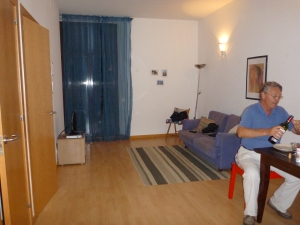 Accommodation was not easy to find in Barcelona and we ended up renting an apartment right in the centre of town. Very handy but decidedly basic.  The sort of place we used to live in as students – but it had a washing machine which we required.

Although the stay in Barcelona was less than successful from a boat finding point of view it was extremely good culturally.  We managed to get tickets to the opening night of a new production of L’Elisir d’Amore by Donizetti at the Liceu.  This was an enchanting evening at one of the world’s great opera houses.  Rolando Vilazon was superb as Nemorino and the orchestral playing breathtaking.  Another night we attended a performance of Purcell’s Dido and Aeneas and a concert of Handel arias and concerti on the final evening.

Every visitor to Barcelona should join Nick Lloyd’s Spanish Civil War and George Orwell tour on a Saturday morning, truly insightful. The Discovery walking tours brought Barcelona alive and taught us how to choose the best Tapas bars.

And so we returned to the waterfront in Palma and kept an appointment to view Exotica, (not exactly our choice of name).  She was alongside the dock and we introduced ourselves to Frank, who has been the captain of the boat since it arrived here as a new boat eight years ago.  Frank is very German and has cared for the boat, on behalf of its German owner, as if it was his own baby.  He was patently less than enthusiastic at the prospect of its being sold and taken away by us. Thus, although polite, answering all our questions and demonstrating all the many improvements he has made to the boat, his manner could not have been described as matey.  In fact he was quite intimidating.  At one point I indicated a particularly clean and tidy piece of work and he replied, without a trace of irony, “Of course, this is a German boat!”

We went back to have another look today when Frank was absent and had a much more relaxed viewing which continued to impress us.  We always felt that the boat would find us rather than the other way around and this is what we hope may have happened.  Now it is a question of negotiating a price and we plan to return to England for a few days to do that.

More photographs later as we felt Frank disapproved of our taking snaps.