For the past few weeks we have been sitting comfortably on our mooring in Palma but unable to make any prolonged voyages because we have had no registration.  Nowadays the authorities want to scrutinise all the boat papers as soon as you enter any port.  These papers include, registration, proof of ownership, proof that VAT  (GST to Australian readers)  has been paid and proof that the boat is fully insured.  Failure to produce these may result in fines or worse and since the governments are looking for every opportunity to make some money, then yachties seem to be a particularly tempting target.

We have been making regular day trips to local anchorages and beaches and getting used to handling the boat. But on Thursday last our British registration finally came through, much to our relief, so now we are free to travel any where we choose. This week we are hosting Angela and Graham Bush and plan a trip to the island of Ibiza which will be an 80 mile passage, perhaps over night. 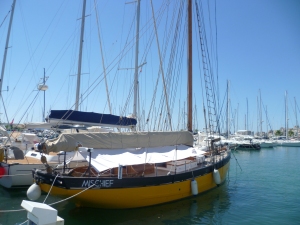 On Friday a boat called Mischief arrived and moored across from us.  Some may have read of the exploits of the highly eccentric mountaineer and explorer Major Bill Tilman. Before the Second World War he was on some of the Himalayan expeditions and after the war he took to sailing very old boats to extreme locations such as the Arctic, Antarctic, Iceland and Greenland.  His boat was called Mischief and is immortalised by him in the books he wrote about his travels such as “Mischief” and “Mostly Mischief”.  The boats he sailed were barely seaworthy, frequently got stuck in ice fields and he struggled to find and retain crew who could tolerate his ascetic ways. There were a number of mutinies all described in the books in a very laconic style.  Mischief was finally lost off Jan Mayen Island, near Greenland in 1968 and Tilman himself, at the age of 79,  was finally on a boat on the way to the Falklands which disappeared without trace.

The yacht that is moored near us is an exact replica, built in Bristol and completed in 2008. She is a Bristol Pilot Cutter and in her build and rig represents the culmination of 500 years of development of the working sailing ship prior to the advent of engines.  She is gaff rigged and all the sail handling is done by block and tackle.  She does have an auxiliary engine to get in and out of ports but everything else appears to be authentic.  There is even a wood burning stove which they say makes sailing around the north of Scotland quite agreeable.  Her owner Richard Boissevain is a great enthusiast and has sailed the boat around the UK and France and now in the Mediterranean for some time.

The difference in comfort and convenience between Mischief and Exotica is very considerable.  I do not think we would be tempted to swap.