We have for a week or so been journeying up the east coast of the French island of Corsica.

Our son Edward and his girlfriend, Charmaine, have travelled from Canada to stay with us for ten days, we collected them from the airport in Olbia, a sizeable town and seaport on the north east tip of Sardinia.
The second night they were with us we anchored in the beautiful bay of Cala di Volpe which is in the south of the famous Costa Smeralda. Sadly the day was rather dull and not emerald at all. The next day we motored up the coast and drove into the harbour at Porto Cervo where you must have a mega superyacht to impress anybody. We then sailed and motored past the Maddalena Islands, a fine cruising ground but not for us this time as storm clouds gathered and another Mistral forecast, we also had to get up to the north of Corsica by the end of the week.

We had a splendid sail across the Straits of Bonifacio which separate Sardinia from Corsica and which are notorious for strong winds. We had a good 25 knot beam reach with just the headsail and made excellent time in good comfort.

Bonifacio from the old town

Bonifacio is an amazing place. The harbour is a deep lateral cleft in the rock rather like a short fjord with a fortified town on the hillside above. Homer describes it thus, “a curious bay with mountain walls of stone to left and right and reaching far inland, a narrow entrance opening from the sea where cliffs converge as though to touch and close.” Odysseus’ fleet was safely anchored here and he moored his own ship at the entrance.
Since it is such a safe natural harbour and stands on a major sea route the town has been the focus of many conquerors over the years and sustained a number of sieges the most notable in 1420 where the town held out for five months against Don Alfonso of Aragon. This was particularly meritorious since the attackers had mortars and cannons and the newly invented musket whereas the townspeople only had bows and arrows, stones, boiling water and molten lead.
It is sad to think that for a place with so much beauty and history we are likely to remember Bonifacio for the drama of the stolen computers. We were moored along the public quay with easy access to the many people milling about. After a most enjoyable evening aboard with new friends we had made on two yachts which had sailed, ergo raced, across from Sardinia at the same time as us,Terry must have thought it would be a good idea to secrete the computers, a laptop and an iPad, in his undies drawer. Unfortunately, at 5am the next morning he was awakened by some rowdy nightclub stragglers, dashed to the chart table to find the computers missing, presumed stolen, since anyone could have walked on board as the hatch was not locked. This caused a morning of serious alarm as all our information is on them in one form or another so it was a race to change all the important passwords and then to cancel all the credit cards as well as informing the police. Only when Julie was putting away the washing at 4pm did she discover them sitting happily in Terry’s under bunk drawer. Of course it was good to have them back but the waste of time, energy and ongoing frustration made it not one of Terry’s finest hours. 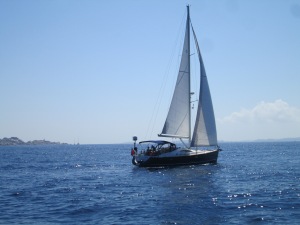 Exotica in full sail off the south of Corsica

We left Bonifacio the next day in convoy with our new-found friends, a Swiss couple in one boat and a French pair in the other and after a long days sail in light airs we anchored alongside each other in a delightful bay of Porte Vecchio, on the south-east coast of Corsica. We all got together for dinner on one of the boats. A feature of this kind of life is that, having much in common, you meet up with people for a couple of days, become best friends and  never see them again.

The next day we did a 52 mile passage in grey skies up the coast to Port de Taverna. There are no anchorages along the length of the east coast of Corsica and only a couple of safe harbours so we had a long haul in light airs where we did a good deal of motoring.

From Port de Taverna to Bastia at the north of the island is only a twenty mile hop and we set off on Thursday morning in bright sunshine with enough breeze to tempt us to set sail for a couple of hours. When in sight of Bastia the wind came round from the west so we decided to motor the five miles into the port. However the wind rapidly strengthened and within about half an hour we had a full gale on our hands with winds 18-40 knots and a single gust of 51 knots. We felt it was too dangerous to attempt to enter a harbour so we stayed offshore, for a time lying ahull with the engine off and being blown towards Italy. As the gale was a westerly we motored back towards the coast in a northerly direction where there was slightly more shelter. After about three hours the wind decreased a little and in a lull we turned back to Bastia and slipped into Port de Toga and managed to get tied up securely in very short order. All was not quite over as, while we were washing all the salt off the decks, another boat entering was caught by a gust and scraped down our bows nearly ripping off the anchor. Some vigorous fending off and a few words of advice for him to back off prevented any damage but it was too close for comfort.
This is the first serious heavy weather we have had, apart from the thunderstorm of a couple of weeks ago, and it was good that the boat handled the conditions well. So much so that Charmaine and Edward were asleep down below for most of the time while Julie and Terry were braving the elements in full foul weather gear. 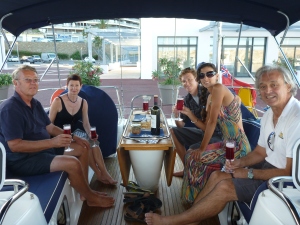 Our next guests Gayle and Mark arrived in Bastia on the ferry from Livorno, we motored with them a few miles up the coast to Porticciolo, a pristine bay where the water is emerald and the sandy bottom is easily visible.

However we spent an uncomfortable night rolling at anchor before making our way back to Bastia where Charmaine and Edward flew to Paris.

A very good meal at Huguette Restaurant overlooking Port Vieux in Bastia before our departure from France and back to Italy and the island of Elba, famous for Napoleon’s brief sojourn where arriving in the Golfo di Procchio we were radioed by the French couple we had met in Bonifacio who were in the same bay! A very jolly reunion on Exotica then a brilliant dinner cooked by our guests while we roll at anchor.