Sciacca is a renowned fishing harbour, thermal baths and a stopoff port for boats travelling to Tunisia for the winter. We had a couple of very jolly evenings with a delightful Swedish couple, Marie and Pelle, and their dog Milou.

We also had the best meal of the summer at Hostaria del Vicolo, tucked away in a tiny lane and fully booked on a Wednesday evening apart from the last table we grabbed. Go there when you are next in Sciacca!

We spent a couple of hours bathing, obligatory swimming cap purchased, in the thermal spa in tepid water smelling of rotten eggs. It must have been good for us.

Our plans changed when Terry’s sister Margaret and friends, Sue and Richard McKenzie, joined us in Sciacca. Instead of our planned cruising the south west coast, we decided to sail eastwards back along the south coast of Sicily. The weather was against us for this trip later in the week so instead of banging into headwinds and swell we had some of the best sailing weather this year, moderate westerly winds allowing Exotica to be seen at her best.

We sailed to Porta San Leone in beautiful sunny weather. This time we ventured into Trattoria Il Pescatore, we could hardly see the peeling paint in the night light. It was busy and the fish excellent. 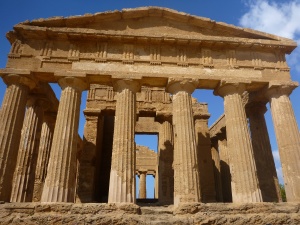 The following morning we got a taxi to the Valley of the Temples in Agrigento, Greek and Roman temples to rival both Athens and Rome.

Thence to Licata, another excellent sail, only marred by a 20 knot side wind while tying up at the marina against a “pirate ship” with no fenders.

A somewhat slower sail back to Marina di Ragusa, but it was the last sail of the summer, so sail we did. 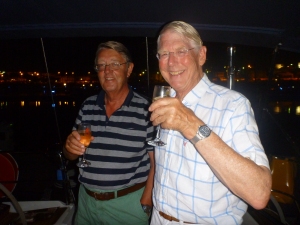 Terry and Richard ready to barbecue 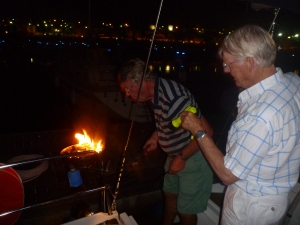 The crew’s last night on Exotica entailed the obligatory hose down and Inox shine before dinner on board, a BBQ no less, accompanied by Terry’s iPod playing Wagner and Strauss to Tom Lehrer and Bing Crosby.

Our guests were booked on a flight from Palermo airport, diametrically across the island of Sicily from Ragusa.  So we hired a car and made our way to the seaside town of Terrasini.

Lunch at Caltagirone, famous for their tiled steps, and just out of Piazza Armerino, the fascinating Villa Romana di Casale. Built in the first quarter of the 4th century containing the richest, largest and most complex collection of Roman mosaics in the world.  There were signs forbidding photography so we didn’t take any pictures despite the fact that most of the other visitors took no notice and flashed away happily.

We delivered our guests early to Palermo airport after the breakfast component of B&B, a coffee and croissant at a local cafe. 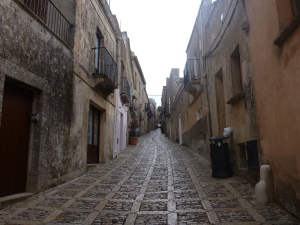 Then drove to the north west of Sicily to the mountain top town of Erice, 750 metres above sea level overlooking Trapani. 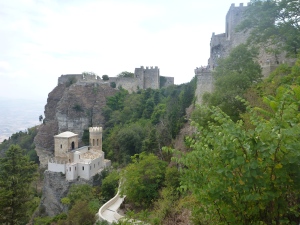 Known as Eryx to the Greeks it has a history stretching back to the Phoenicians.

It is crammed with ancient churches, palaces and towers on narrow cobbled streets. 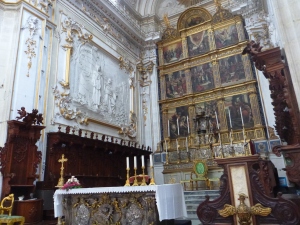 The next day we drove back along the south coast to Modica, founded in 1360 BC. Another picturesque steep hillside town, it was destroyed by the earthquake of 1693 after which the 29 churches were restored in the baroque style. It’s other claim to fame is the chocolate factories influenced by the Arabs during their occupation. 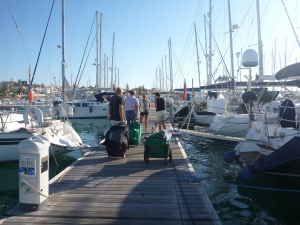 On Sunday 28th September we waved goodbye to Exotica in her home port of Marina di Ragusa. It took a week of servicing, scrubbing, oiling decks and packing to get her into pristine condition to leave in the care of Anne and Stephen from Wandering Dragon, who will watch over her until our return.

All packed away for the winter. See you in April.

So we come to the end of our first year of Mediterranean cruising.

It’s been full of adventures, we’ve learned a great deal and made most of the mistakes of beginners.  We were certainly a little unlucky with the weather.  Everyone agrees that it was not a good summer in the Med. June and July saw multiple weather systems with heavy winds around Sardinia and Corsica causing us to spend much time avoiding them.  We weathered a couple of quite nasty storms.

We have met some marvellous and fascinating fellow sailors on the way and we have learned that things go wrong with them too.  In fact the motto of yachtsmen seems to be “There is always something!”

It was probably a mistake to spend August in the busiest and most expensive time around Capri, Amalfi and the Bay of Naples.

Our time in the Aeolian Islands and Sicily have been stunning and we had some excellent sailing particularly in the final month of the cruise.

Next year we plan to return to Exotica in mid-April and take off for a mini-refit in Malta.  From there we hope to sail up the Adriatic coast of Albania, Montenegro and Croatia as far as Venice.  We intend this to be a more leisurely cruise than 2014 with a greater proportion of the time spent at anchor around the islands of the Adriatic.

We have also had some wonderful crews during the year and hope they and others will return in 2015.