We are taking a holiday from Exotica, hired a car and headed to Germany and Austria for a dose of culture.  More about that in future posts.

Course of Exotica through the Croatian Islands.

The Croatian Islands between Dubrovnik and Split continue to provide the greatest pleasure.  We swapped crew at Korcula town and were joined by a regular Senta crew, Mark Prior and his wife Gayle Tollifson.  After a massive supermarket shop we returned to Uvala Luka bay on the tip of the Croatian mainland peninsular at Loviste, we picked up a mooring and had a wonderful meal at the restaurant ashore.

The evening was somewhat spoiled when the wind came roaring in at 2am and Terry, being a little uncertain about the security of the mooring we were on, spent the rest of the night in the cockpit on anchor watch.

The next morning we had a good breeze as we set off for the island of Hvar, however as is often the case, it came from dead astern and as the morning went on it decreased to a light puff, so the engine back on again. 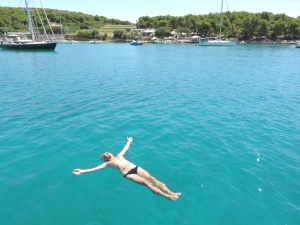 In the early afternoon we entered the bay of Vinogradisce on the south of Pakleni Islands, it was very busy with many craft, swimming areas and restaurants but we found a good spot to anchor and enjoyed a peaceful afternoon and night, swimming frequently in the warm water.

We stayed in this bay for an extra day, moving Exotica to a position on the shore and taking 2 lines to trees on the beach.  This was the first time we had done this and was a useful learning experience, (which is code for –  we didn’t do it very well the first time.)

Hvar town and Pakleni Islands from the fortress

A water taxi to the picturesque town of Hvar, very popular with tourists, and climbed yet another hill to another mountain fort with a fine view. 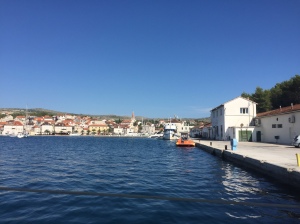 Two nights on the island of Brac.  One in Milna, a small port almost totally dedicated to yachts and the rather smelly fish cannery. 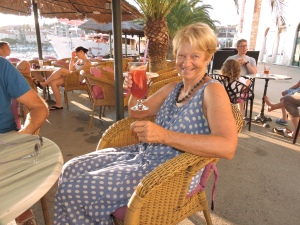 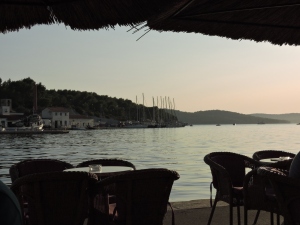 Exotica’s home for the night in Milna

Then to the small bay at Bobovisce where the mooring buoys are packed into the fingers of the bay, very well organised and the surroundings idyllic. 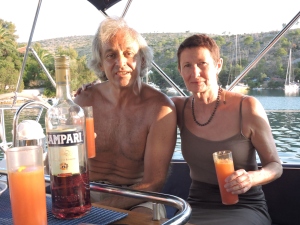 Finally, on this part of our travels to the mainland near Split where, at Marina Kastela, Gayle and Mark left us.  The marina is huge with supermarket, restaurants an efficient boatyard and only 20 minutes from Split airport. Six charter companies keep their boats here, but the facilities for overwintering on the hard seem excellent.  In consequence, we have decided to leave Exotica here this winter.

On Friday July 19th we left Exotica in the marina and set off north to Germany for our holidays!