Exotica has been comfortably moored for four weeks in our quiet marina Veneto di Venezia on the tranquil island of Certosa less than twenty minutes from the heart of Venice.

Low tide, spires of San Marco in the distance

Every day we took the 4.1 vaporetto into San Marco to visit a couple of the hundreds of museums and churches adorned with Titians, Veroneses, Tintorettos and Canalettos.  It is not surprising to learn that there are 314 named painters of the Venetian school. 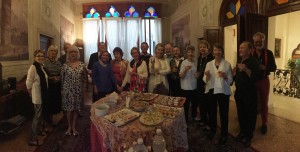 For six days we were lucky enough to join a group of music lovers from Sydney spending a few days in Venice before moving to the Bach festival in Leipzig. 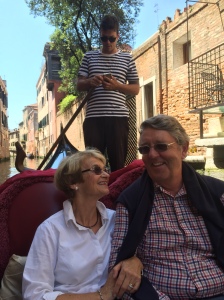 Shouldn’t the gondolier be concentrating on steering!

With them we had some special occasions including a gondola ride, not normally something we would do, but this one was rather special with a brief stop at a canal side hotel’s boat, to take on board two bottles of prosecco and some nibbles. 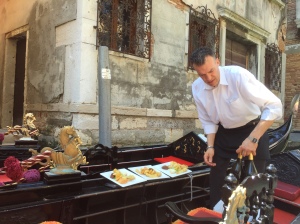 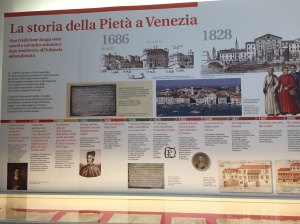 We also had a specially guided tour of the Pieta and particularly memorable was the night time visit to the Basilica, where, as darkness fell, they turned on the lights to illuminate the amazing golden frescoes on the ceiling.  Despite being a Roman Catholic church all the architectural influences in this building come from the orthodox religions further east. 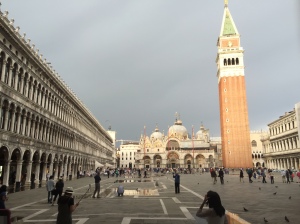 There are 7 domes in San Marco 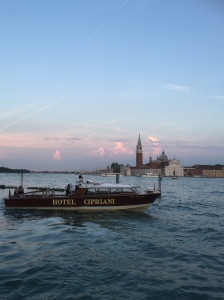 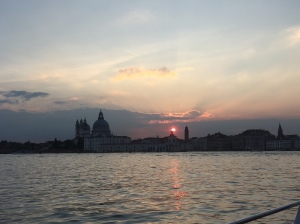 The weather has been pretty perfect so far, cool with the occasional shower, so good for sightseeing. It  has started to warm up but one is not tempted to dive into the lagoon, however!

to fine dining, thanks Richard and Vicky

Doge Palace on right and prison on left, from the Bridge of Sighs

With our friends, Vicky and Richard Franklin, who joined us on board for four days, we visited the Doge’s Palace and had a spectacular lunch at Linea d’Ombra restaurant overlooking the canal.  They are bridge players so each evening, once the sun had set, we sat down to play cards.

Opulance in the Doges Palace

Thursday June 23rd we flew back to England for 12 days for a feast of opera. A momentous day for Britain, the shock referendum result  to leave the European Union greeted us on the morning of the 24th. The country has remained in turmoil, the journalists having a field day and the politicians at loggerheads but it has not affected our exceptional Wagnerfest! 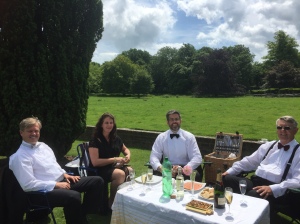 Taxi to The Ring Cycle at Festival Hall 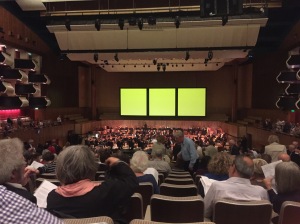 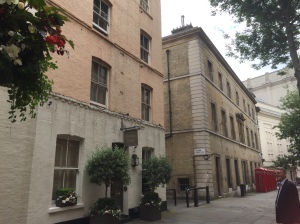 The Fielding Private Hotel with Royal Opera House in background

The Ring with Marilyn and Richard Plummer and Margie Jones

We return to Venice on July 5th and  plan to sail to Trieste and the coast of Slovenia.