Two cruises in the Northern Adriatic

Angela certainly chose a spectacular week to join us on Exotica. An early flight from Leeds meant we could leave Marina Veruda at lunchtime in blue skies, we ran under full sails in not much wind, anchored in good time for a swim after the 16nm passage to Otok Unije in the beautiful bay Potkujni. 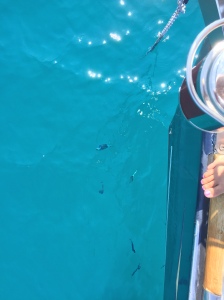 Otok Ilovic was supposed to be a treat to eat out, after carefully studying the internet we chose the second best restaurant, or so we thought. It wasn’t a good start when the  grumpy waiter gave us the wrong starter, which we agreed to eat anyway, but a plate of anchovies floating in vinegar did not impress. How could they manage to ruin Pasta with Prosciutto and Truffle? It sounded delicious, but the meat was salty gristle rendering it inedible as was Terry’s pork loin, Istrian style we were told, dried and salty! We were grumpy when our uneaten plates were cleared and a huge bill arrived…would we like some Grappa?….no thank you. The TripAdvisor review said it all.

You never know when the NE Bora will blow but leaving Ilovik we were surprised by the 15-25 knots giving us a speedy beat with reefed sails to this idyllic bay on Silba. Angela and Julie rowed ashore and walked the rocky path to the delightful village, there are no cars on Silba, as with many of these islands. Dinner on deck listening to the Proms was magical.

There are so many islands in the northern Adriatic one is spoilt for choice. We often set out for one and end up at another, as happened when we found the town of Ist, on the island of the same name. There we were treated to suckling pig on the spit, delicious. 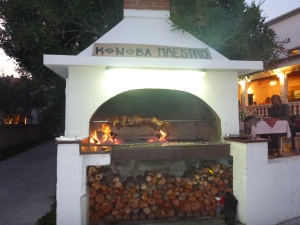 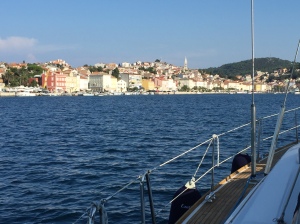 There is always a fly in the ointment, though, the generator chose to conk out in Ist, so we needed a night in a marina to charge the batteries and fill up with water. 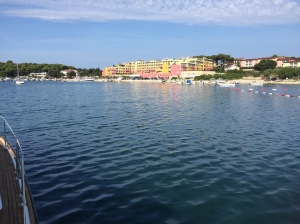 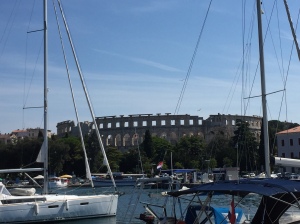 Our  crew change was to be in Pula so we sailed back to Istria and entered the historic, huge bay. The marina nestles under the Roman Amphitheatre, from the reign of Emperor Claudius (AD41-56), today it is the sixth largest and best preserved in the world.

Terry’s sister, Margie, and Lizzy and Tony Dyson joined us for 7 days. We had hoped to go back to the islands but a bora was forecast all week so we sailed north. The planned swim after picking up a mooring buoy in Rovinj had to be postponed when we saw jellyfish under the boat, they are rare in Croatia, we have only seen them on a couple of the north coast bays. 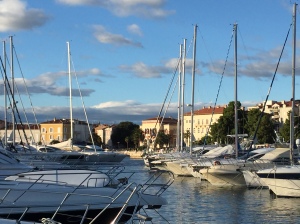 We hadn’t been ashore when we stopped at Porec in August. With storms looming it was a good destination as the historic town has great charm. The marina, however, is extremely tight to steer 49′ boat into!

Badly damaged during the second world war it has been carefully restored, however, many Venetian style buildings, medieval houses and palaces have survived. The Christian Basilica built by Bishop Euphrasius in the 6th century has magnificent Byzantine influenced gold mosaics. Art historians consider these to be of greater value than those at Ravenna. 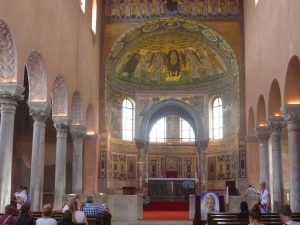 Tony and the bells

Porec marina from the Campanile 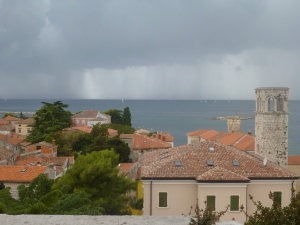 Storm over Porec, a day for sightseeing

The fine views over Porec old town. The Bishop’s Palace, they certainly knew how to live.

Sunset over Vrsar marina from the old town

An exciting sail 10nm south to Vrsar, a large marina which was full when we tried to visit in August. The hilltop, fortified town has Illyrian forts and four ancient churches. From 983 to 1772 the castle belonged to the Bishops of Porec. Casanova is reputed to have frequented Vrsar back in the day!

Lizzy and Margie watching the sun set from one of the sculptures in the Sculpture Park, Vrsar 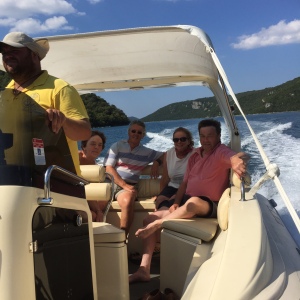 A faster boating experience than our usual

Julie’s birthday, the 8th, we took a high speed taxi 6nm up the Limska Draga Fjord, the inlet was formed when the Istrian coastline sank during the last Ice Age, allowing the sea to rush in and fill the Draga Valley. 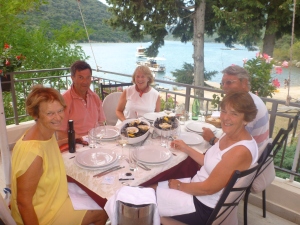 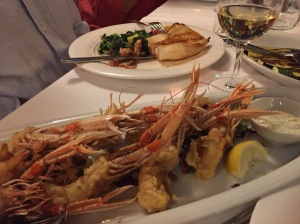 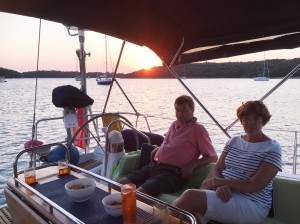 At anchor in U Soline

Exotica sailed beautifully with reefed sails in an easterly 15-25 knots, 25nm from Vrsar to Uvala Soline, just south of Marina Veruda. A night at anchor for the crews last night.

Time to see the historic city of Pula before a late night flight back to Gatwick. 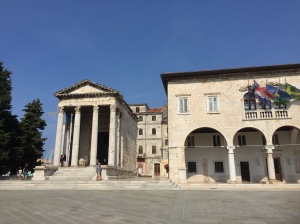 Temple of Augustus, the only remaining building from the Roman Forum was reconstructed after a bomb hit it in 1994.

Now on the final 2 weeks cruising these spectacular islands, to Zadar and back.