Storm-bound in a tiny harbour on one of the outer islands of the Croatian archipelago is a good opportunity to update the blog.  With thanks to all those who responded to the last one, it was very good to hear from you. 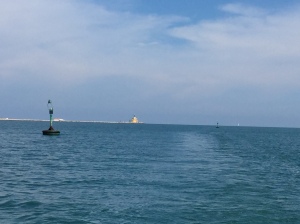 It takes a good half hour to motor up the channel being careful to stay within the marker buoys.

Our month in the Marina Santelena in Venice flew by.  The weather throughout was superb and we were able to explore the city from the quiet and comfortable backwater of the marina at the very edge of the city.

The fly in the ointment, a fresh water leak. We seem to spend our life sopping out bilges. Thankfully traced to the anchor locker shower which must have frozen during the winter. 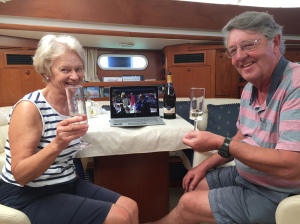 Terry honoured his promise to find a way for me to see the Royal wedding. We shared the occasion with Juliet and Nick Mason-Jones

The Duke and Duchess of Sussex

Cousin James Munro, tuning before a chamber music concert in Treviso. So good to see him, if only briefly.

Dinner with the Mason-Jones’s at our favourite, Osteria ae Sconti 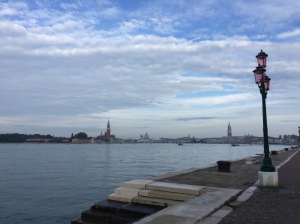 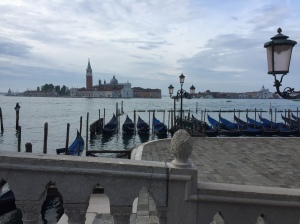 Storm clearing in the early morning

Bridge of Sighs before the crowds 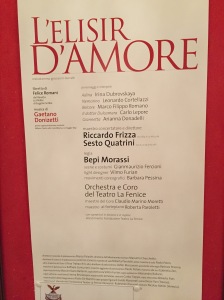 We also managed some interesting cultural events.  At La Fenice we were delighted by a splendid production of Donizetti’s L’Elisir d’Amore.  Just the best fun, full of good singing and witty direction.  It was so good that we booked in for La Traviata the next evening.  This was a mistake.  Hard to mess up a sure fire hit like Traviata, but they did. 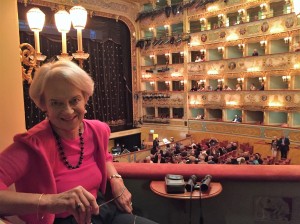 We booked these seats the day before so they were only 80 Euros!

Later we attended an excellent concert, Siegfried Idyll, Schubert’s second Symphony and Enigma Variations, under the inspired baton of Antonello Manacorda. It really was terrific.

Waiting for the No 1.

Arsenale in the early morning 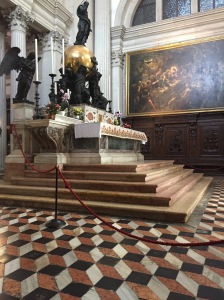 Il Gondolieri in Dorsoduro, old world charm. This must be the only restaurant in Venice which does not serve fish!

I don’t think I want these snails after all! 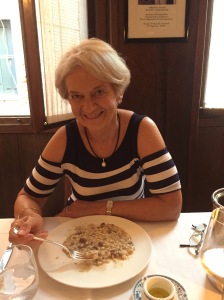 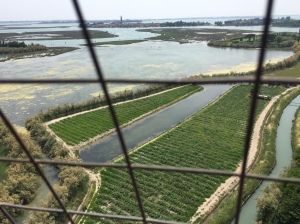 Torcello and Burano in the distance

The best thing about this campanile, there were stairs only on the corners, between were ramps. 11thC Chiesa di Santa Fosca beside the larger basilica.

Gold Apartment Mercanti. We’ve stayed in some wild places, this was grand in an extremely small space

On 4th. June, we left Exotica in her berth and took a train to Milan for three days.  We stayed in a strange apartment squeezed into a thin building in the Mercanti right near the Duomo.  It had the world’s smallest, oldest and most rickety lift.A squeeze for two passengers, without luggage.

Ornate, and had the best hairdryer in any hotel I have been

The tiniest lift in the world! 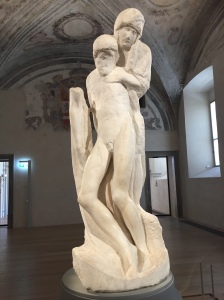 Michaelangelo’s Rondanini Pieta, Milan. He worked on it from 1552 until his death in 1564. Not a patch on his Pieta in St Peter’s Basilica, in my humble opinion.

Some extensive sightseeing ensued including the Castle Sforzesco and Michelangelo’s Pieta, Leonardo’s Last Supper and, of course, the Duomo, built entirely of local marble from 1390 took 600 years. The ornate Gothic marble spires were added in the 1800s, they are not structural so it’s possible to walk around the entire roof.

The chancel of the Duomo. The first part to be built. Beautiful stained glass windows

The marble spires of Milano 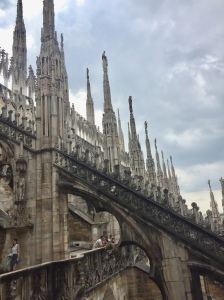 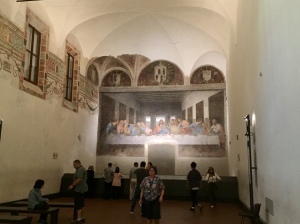 The refectory of the Convent of Santa Maria delle Grazie, where Leonardo da Vinci painted The Last Supper

We paid rather a lot for a couple of tours, well worth being shown a city by a native dweller. Milan is about to have a referendum to vote for the return of the canals which are buried under the roads and piazzas. Milan was navigable by canal from the twelfth century. The process of covering them began in the 1930s, the last working boat plied the waters in 1977. The locals say Milan has more than their fair share of precipitation because of the water under the city! 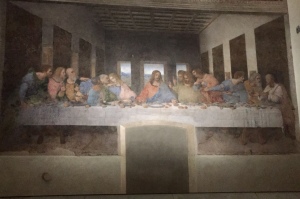 Believed to have been started 1495-96, commissioned by Ludivico Sforza, Duke of Milan, the last restoration was completed in 1999

The frescoes are awe inspiring.

The cloistered nuns choir behind the nave of Chiesa di San Maurizo al Monastero Maggiore, once the most important Benedictine convent. Used every Sunday from October to June to celebrate in the Byzantine Rite, in Greek, according to the Italo-Albanian tradition. Consecrated in 1518

The cloistered nuns choir behind the nave of Chiesa di San Maurizo al Monastero Maggiore, once the most important Benedictine convent. Used every Sunday from October to June to celebrate in the Byzantine Rite, in Greek, according to the Italo-Albanian tradition. Consecrated in 1518

A highlight was an evening at La Scala to see Fierrabras, the only opera by Franz Schubert that is ever performed and even then, very rarely.  It happened to be opening night and La Scala certainly put on a very lavish performance with fine singing, elaborate sets and sumptuous costumes for this remarkably tuneful opera.

We had to mortgage our home for these seats 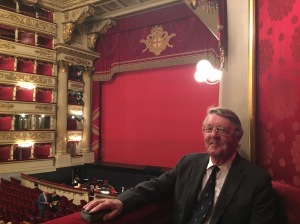 ….but they were wonderful…

Most people buy fashion in Milano, us, a Swatch watch suitable for wearing on a yacht.

There is one kilometre of ancient halls in Arsenale Biennale

We returned for our final week in Venice.  Living in Venice is living in an art gallery. Stocking up with wine and having some last-minute repairs done on the boat.  We have found some excellent engineers and so the various leaks and the water maker have now been fixed.

Free Space was Architecture Biennale 2018. This is a Korean exhibition

Look what I found in Biennale Arsenale

Everyone who visits Venice has this photo

Of course, among all the pleasures there have been some minor disasters.  Terry, on line, managed to book the return train tickets to Milan in the wrong direction.  There was no cancellation, so we passed, in both directions, Italian trains with empty first-class seats with our names on them.

Julie’s ticket for the vaparetto water ferry failed to register with the tap on.  Unfortunately, one of the very few conductors was checking the tickets and hers didn’t register on his machine.  Remonstrance with the authorities was to no avail and she ended up paying the 69 Euro fine or risk a criminal record in Italy. She considers it as her contribution to keeping Venice afloat. 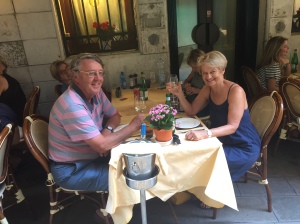 How do you fill in an hour and a half before the barber’s? You stumble on an Osteria, no idea of the name, but I would try to find it again, the best bruschetta ever. What a wonderful farewell to the restaurants of Venice.

Terry had the best hair cut at Paolo Peppi, near Rialto for 18 Euros

Many of the boats in the background are used as BnB, 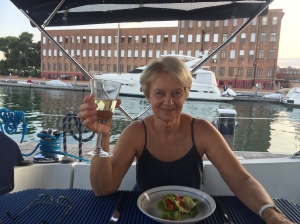 The last supper on board in Venice

On Saturday June 16th. at 5 am we left Marina Santelena for the last time and in a beautiful sunrise motored down the channel and away from Venice, passing four huge cruise ships on their way in.

Time to depart our safe harbour. 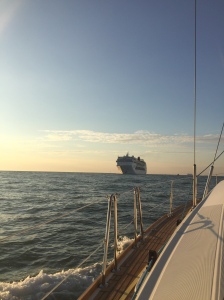 We have now had three years in which we have spent at least a month in Venice but as the plan now is to head south to Greece we are saying farewell to some much-loved places in the northern Adriatic.

It was champagne sailing right across the Adriatic with the wind, N to NE 12-18, on the beam and Exotica flying along at a steady 8.5 knots.  We have never had an entire passage without using the motor. 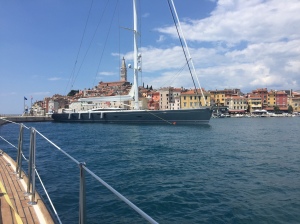 Awaiting the harbourmaster in Rovinj. There’s our next boat

Thus, we were docked in Rovinj, on the coast of Istria shortly after lunch, but of course the Harbourmaster was closed between 1 – 5 pm. so we had to wait around for him to return.  We then had to pay the sojourn tax which has just been raised by 400% since last year.  Croatia has never been cheap but boating around here is now even more expensive and likely to deter many from coming.  Sadly, this only applies to boat owners and will not affect the hundreds of charterers.

Bobbing on a mooring in Rovinj watching the sun we saw rising this morning in Venice, setting over Croatia (from the foredeck, Mark Prior!)

During the last week we put into the charming town of Pula, the largest town in Istria, to organise telephone and other communications, a night on our friend, Marino’s, mooring in Banjole with an excellent meal in the tiny restaurant above the shipyard, Konoba Pap, then had another invigorating sail leaving Istria for the last time and anchored in a favourite bay, Artuturi on Mali Losinj.

Artaturi on Mali Losinj is a a large bay and perfect anchorage The completely naked Slovenian on the left brought his anchor up, fouling the British boat on right. an hour of fascinating bumping, pulling and diving freed it.

Farewell to Artaturi. Who owns these superyachts? 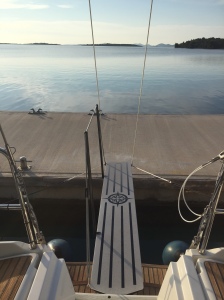 Continuing our southern passage, we sheltered in a comfortable small marina called Veli Rat on Dugi Otok to sit out the storm which had been forecast for June 22nd. There was plenty of rain and wind, but we closed all the hatches read books and watched the television. 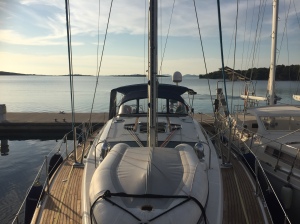 They say there is a storm coming tomorrow, June 22nd 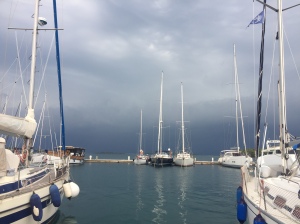 Exotica tied up securely with the storm looming 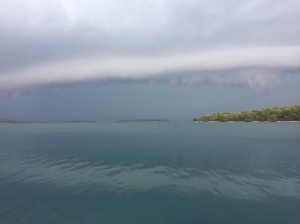 The calm before the storm

Veli Rat, the end of a rainy day

For the next week we will explore this area of Central Croatia, the endless islands are quite spectacular.