Our tour around the wonderful Bay of Kotor

We rather fell in love with Montenegro and seriously considered moving the boat there for the winter.  But the thought of doing the 250 nautical mile passage north again dissuaded us! The advantage of this area is that there are no charter companies or flotillas,  A few charter yachts come down from Croatia but it is much quieter on the water than Greece,  which is overrun with charter companies, which have moved recently from Turkey. 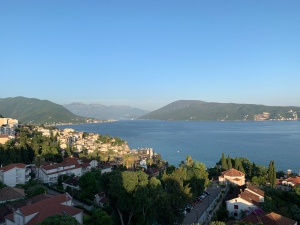 Where Operosa Montenegro Festival is held each August 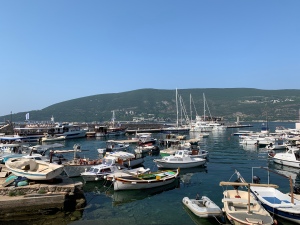 Magnolia trees in Herceg Novi, right next to the international water polo centre

We’d hoped to have had a free week at the brand new five star Marina at Porto Novi, as it’s part of our marina’s group, but it was not officially open until the next week, however, they were very welcoming and gave us a free night alongside. It is likely to be very smart, quite expensive and targeting smaller boats than Porto Montenegro. Maybe next year…. 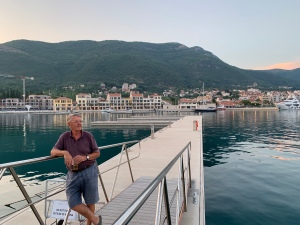 It won’t be empty like this next year, Exotica in the distance

Maybe our proposed berth for 2020

Cooler to depart Bar in the early morning, and quicker!

We had four overnight stops on our return journey to Greece. Bar, the southernmost port in Montenegro, where we managed to check out via the harbourmaster and police with much less trouble than on our arrival here three weeks previously. It’s not an attractive town but will be remembered for tasting our first Negroni cocktail.

Durres Archeological Museum, it is not a charming city

The inventor of alternate gangways

Our early start rewarded us with a pod of dolphins swimming under the boat on the 50nm passage to Durres, where in the the weeks since we were last here they have installed “lazy” bow lines for yachts to come stern to like marinas elsewhere.  This was all very well, but the quay they have selected is high, for container ships, so getting on and off the boat in the normal manner was difficult as our passarelle was far too steep.  However, a lash up with bargeboards across the pushpit and plenty of rope lifted the passarelle high enough for a very satisfactory and safe gangway.  Only a little ingenuity required. 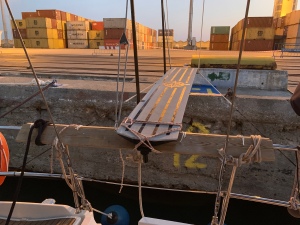 A bit of a climb from the aft seats, thank goodness for pilates. 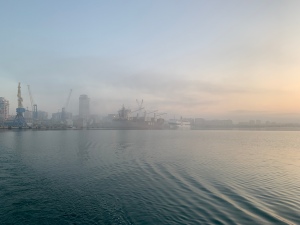 Sea mist over Durres harbour. The previous day there was thick sea fog until lunchtime

We left Durres at first light the next day in a heavy sea mist which gave us some concern as the channel away from the port is very narrow and there are shallows and rocks all around.  Fortunately it lifted and there was no traffic anyway. 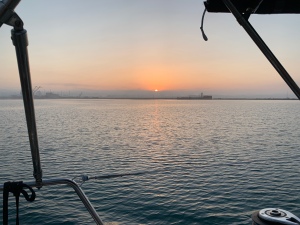 We motor-sailed for seven hours to the entrance of Vlore bay where we were hit a 15 knot headwind.  We decided against bashing into it for another five hours to Sarande.  Anchored in Sheen Janit, the little bay we’d lunched in with Jane and Jeff. It is sheltered, clear water, good holding and we had a comfortable night in the southerly.

One mooring buoy for day trippers from Vlore 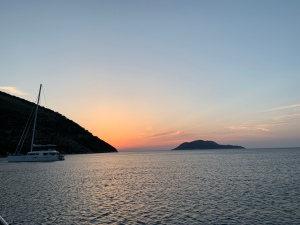 This 62ft cat had been beside us in Durres last night 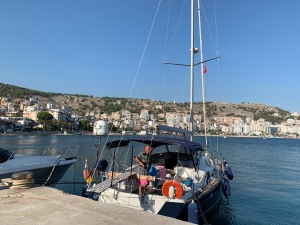 On the ferry wharf in Sarande

Motored the entire 52nm to the final stop in Albania, Sarande, where we put down 80 metres of  anchor chain coming astern to the ferry quay.  Another high quay necessitating the elevated, botch up, passarelle. It was a beautiful evening so we finished off the orange Tanqueray on the foredeck in moonlight. 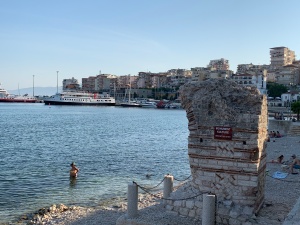 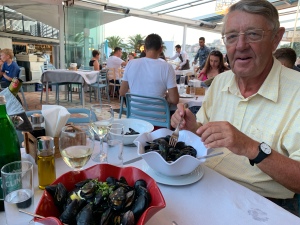 Back to Restaraunt Limani for mussels 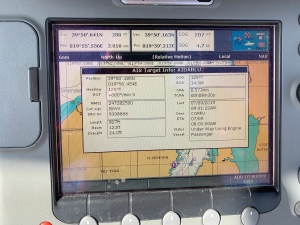 AIS can tell us the Aida Blu passenger ship will be .573nm away from us in 08.30 minutes

A 16nm motor across the channel to Gouvia on Corfu and Julie starts counting Schengen days again.  This was not without its problems, we had to take a taxi to the commercial port to get Julie’s passport stamped. 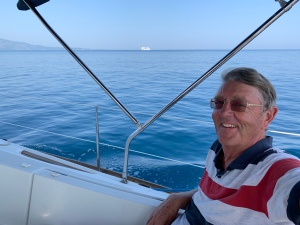 Aida Blu in the distance, we slowed down to avoid a collision 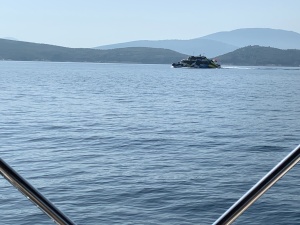 You see some unusual sights on the water. this “boat” called Guilty had a British flag!

Then we found Guilty at home in Gouvia

Storms were forecast so we stayed an extra day to wash clothes and the boat. A bright, hot morning but the whole area including the marina was without electricity so while we hosed the decks we put the generator on to power the washing machine, finished hanging washing on deck when it began to gently, but persistently, rain Sahara sand!

The storm came at midnight, 36 knots from the north when it had been forecast to be a southerly. We were both out on deck in the pouring rain, had to put the motor on to tighten the bow line as the stern was being pushed onto the jetty.  It proved the point that even if the weather is settled it is important to have all the lines appropriately placed and tight since storms can be fierce, however brief they may be.

As the promised NW wind didn’t eventuate, again we motor sailed the 67nm to our home port in Lefkas and were happy to be back in our snug berth and to stay still for a couple of days.

We also replaced the mainsail which was fifteen years old, had lost its shape and was tending to stick when furling. This is a dangerous complication of the in-mast furler. The new one works very sweetly so far. 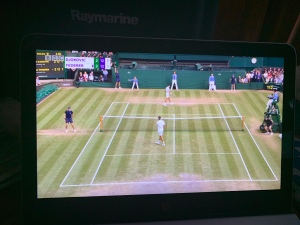 Gentlemans Final at Wimbledon. Epic five hour match. Note the score, this is in the fifth set tie breaker. Federer did have his chances in the fourth set!

On Saturday 13th. July we were joined by our friends Carmen and Anthony for ten days. Once again on guest’s first day the weather was poor, wet and windy, so we elected to stay put and they watched the Men’s Final at Wimbledon, all five hours of it. 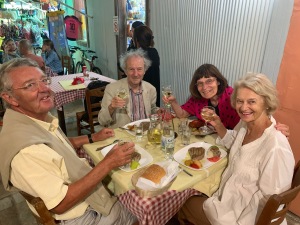 We then set off for a tour of the islands of the southern Ionian, anchoring in our favourite Goat Bay.

Unforecast NE blew into Spartahori causing an uncomfortable surge on the dock. Boats turned away, too dangerous to dock 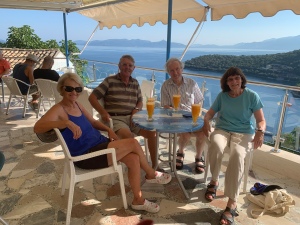 Breakfast with a view of calm waters in Spartahori

Back to see Babis at Porto Spilia in Spartakhori.

Anchored with lines ashore in a bay in Ithaca 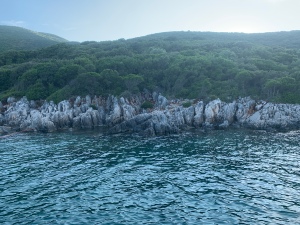 Anthony raised the bar dressing for dinner on board, Terry was forced to change into a collared shirt!

Pera Pigadhi, this is Julie’s kind of water 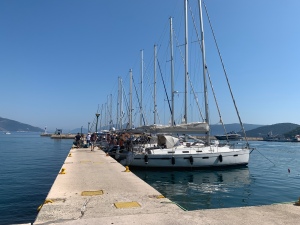 We met up with friends of Carmen and Anthony in the harbour at Sami, in Cephalonia. 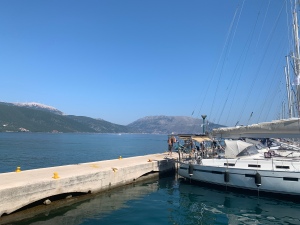 Efemia to the north of Sami Bay 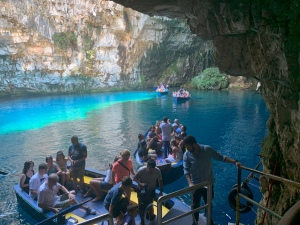 Melissanin underground lake near Sami. The water comes from Agristole, 24 klm underground and enters Sami Bay 2klm from here. In ancient times the “roof” of the mountain fell at this point making it shallow and crystal clear

We stayed there an extra day, hired a taxi and driver and explored the island, stopping at an amazing underground lake, the picturesque harbour at Assos and finally the beach at Myrtos.  It was very hot so a swim was most welcome 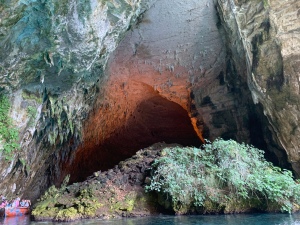 Ancient town of Assos on NW coast of Cephalonia, untouched by earthquakes 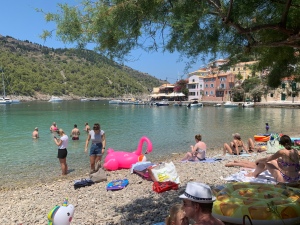 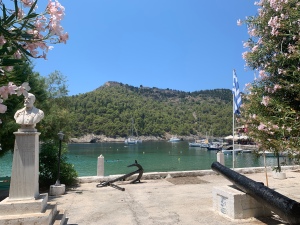 Assos overlooked by a Roman castle

I have never swum in water so turquoise. They say it’s a sandy beach but it’s not. There is a thick layer of big pebbles at the water’s edge making it difficult to walk on. Then it becomes deep very quickly causing rough waves breaking right on the beach in any wind. We were lucky to be there on a windless day. 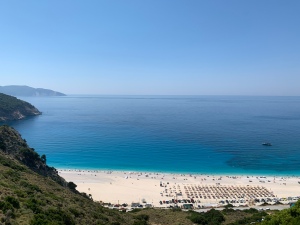 Mirtos Beach. The finest stones make it look like sand further up the beach. Huge traffic jams on the tiny road and jammed carpark.

The yacht in the distance was 185ft, I wonder what they were eating tonight 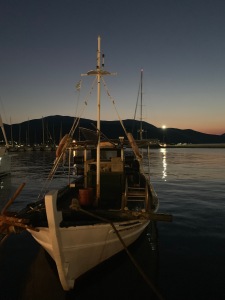 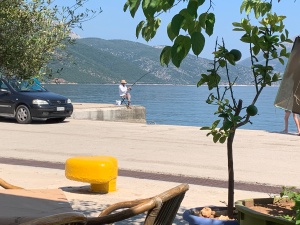 This fisherman was in the same spot each morning, Sami

Our anchor came up without being fouled leaving Sami Harbour

WE couldn’t get a free berth at 12 Gods, but the food was spectacular. They’ve promised us a berth next time

A night in Sivota, just about the busiest harbour in Lefkada, followed by the quietest anchorage completed the trip and by Tuesday July 23rd. we were back home in Lefkas for cleaning and closing up the boat.

Wasps are a problem on some islands, in Sivota they say if you burn Greek coffee it will repel them????

This is what happens when people don’t put their anchor down properly, they drag onto other boats, even in calm conditions….charterers!

My vegetarian skills are improving 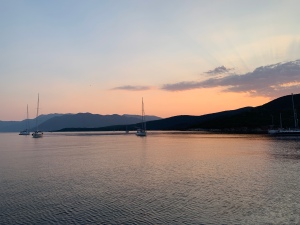 Our last night at sea with Carmen and Anthony, back to Varko bay, the other side of Goat Bay. A brisk NW from 4-7pm then a calm night 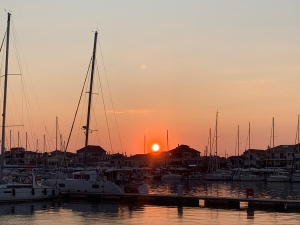 After a day of cleaning and packing we dined on board and were rewarded by  a beautiful sunset. 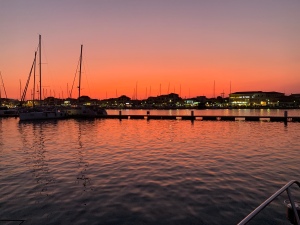 Music in the cockpit, sunset on the foredeck

We decided to leave the boat for the month of August as the Ionian is impossibly busy with all the Europeans on holiday. So, on Wednesday July 24th. we left with our guests and flew to London where we have a busy itinerary of seeing family but also the Proms, Holland Park Opera, Edinburgh Festival and Glyndebourne to look forward to.

From Montenegro back to Greece.