Course of Exotica. Brindisi to Sipan.

While waiting in the marina in Brindisi we were joined by Anna and Tim Cropley who only had one night on board before we set off across the Adriatic from Italy to Montenegro. This was a trip of 112 nautical miles and we set off at 6.30 pm on a dull and windy evening, although the forecast was quite good.  There was a fanfare of horns from adjacent yachts as we motored out of the marina, I think they thought we were a bit foolhardy embarking at that time and they would soon see us returning.  In fact, after three hours of beating to windward a little off course the wind dropped off and we motored very comfortably through the night.  (At least three of us were comfortable, Anna felt the motion rather severely.) 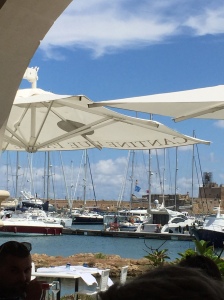 Lunch at Marina Brindisi before our evening departure 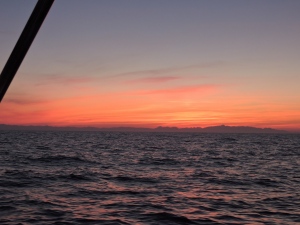 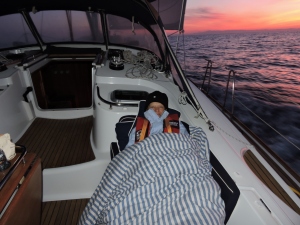 Hourly watches meant sleeping on deck, it was cold!

We arrived just after mid-day at Porto Montenegro, which is to the north of this country.  There is a very new marina still being built and is being tailored for the very affluent.  This appears to be working as the pontoons were full of Superyachts and also a handful of Megayachts. Exotica was a bit dwarfed by the magnificence.  Think Monte Carlo with a dash of Cannes to get the picture.  Nonetheless the staff were incredibly helpful, particularly in assisting us with the entry formalities to a non-EU country which required Terry to visit the Police, the Customs, the Harbourmaster and then the Police again with innumerable stamped documents before any of the rest of the crew could step ashore.

Despite the magnificence the daily cost was quite reasonable and 50% off happy hour at the boutique five star Regent Hotel, dominating the marina, meant two rounds of cocktails every night of our stay. 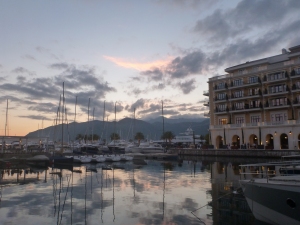 After two days to get over the night passage we motored a few miles within the Bay to the ancient seaport and city of Kotor.  Yet more city walls, ancient churches and history of earthquake, famine and massacre.  There was also a 1400 step city wall climb to the summit of the castle.  An American tour group started with 65 but only three reached the top. All the Exotica crew managed to achieve the summit. 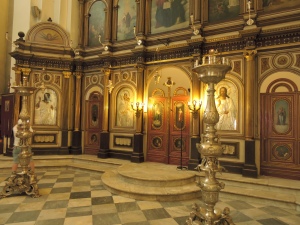 The Great Wall of Kotor

We left Montenegro on June 20th. and on a grey but completely calm day motored into Croatia stopping at the first available port, Cavtat, to clear customs and immigration.  Again more trips between police and harbourmaster, where despite there being computers on the desks, all our details were laboriously entered in long hand in a huge ledger.

Duty free diesel in Tivat. Any spillage of fuel, boat impounded and has to appear in court.

We decided to spend the night in the bay at Cevtat.  This was a mistake as, despite there being apparently plenty of room to anchor, we had great difficulty in getting the anchor to hold.  Finally we got dug in just as the wind started to come up and night to fall.  It was a rather fraught evening and Terry spent the night on deck watching the gusts increase across the bay and us get closer and closer to other boats and mooring buoys.  Finally, shortly after dawn it was clear that we were dragging and in fact had snagged the mooring line of a small fishing boat.  So we got everyone up, managed to extricate ourselves and motored out on a very windy morning.

Cevtat, our introduction to Croatia, before dark and increase in win 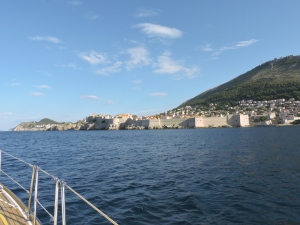 After an uncomfortable night we headed straight for the marina at Dubrovnik where by 9am we were safely tied up to a pontoon, hang the expense!.  Anna and Tim left us there to continue on to Korcula for a few days.  They were splendid crew and models in their willingness to participate in all the activities of Exotica, particularly the washdown and clean after every trip. 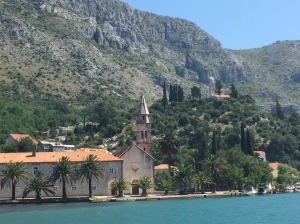 After a day of washing and cleaning new crew arrived on July 1st. – Janelle Berents and Kate John, after a quick shop we set off for the islands of Croatia.

Our first stop is Luka Sipan, a delightful small village at the bottom of a long inlet. We picked up a mooring buoy a few metres from a restaurant where we had one of the best fish meals so far.  Followed by a very comfortable night. 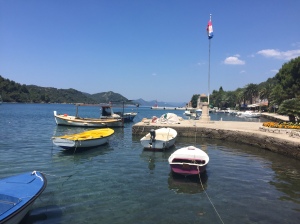 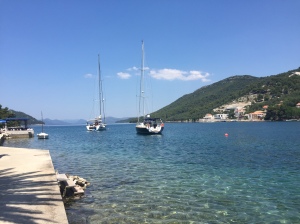