As we had predicted Mallorca is yachting central for the western Mediterranean. 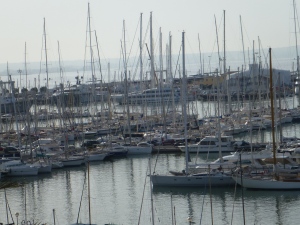 This view from our hotel window only shows a fraction of the boats here ranging from the largest superyachts to tinnies.  So it was disappointing, to say the least, to find that our first encounter with a yacht broker fairly unsuccessful.  Julie, on her early morning walk, returned with a brochure of one very likely candidate, but when we returned to the office after breakfast, we found that the boat was in Gibraltar, some 400 miles away.

Our main internet contact had been with a Dutchman who seemed to have plenty of possible choices on his books and he collected us promptly at the appointed time.  However, we discovered that our first viewing, after a considerable walk, was a very nice boat indeed but it was already sold.  This fruitless exercise cooled the relationship a bit but nonetheless we were taken to another two boats, one of which was really too big and powerful for our requirements

and the second was an Oyster of enormous proportion and well out of our price range (although Julie fell in love with it…wouldn’t she!!).  The fourth boat he had to show us was out on a charter and supposed to be here but was not.

We didn’t have much better luck at dinner where we went to a restaurant highly recommended by locals.  There in our ignorance we ordered what we thought would be a delicious meal of mixed tapas and ended up with one plate of what in Australia would be called smallgoods ie. a variety of rather fatty salamis. We then had to swallow our pride and order the rest of the feast. The house ros­­é was also a bad choice, so we have lots to learn!

We have another appointment with a well known yacht broker tomorrow and are hoping for more success.