For those not interested in opera, the sailing will, hopefully, recommence after July 8th.

We have returned yet again to the UK to attend seven operas in the next two weeks.  We are eschewing the large Opera Houses such as Covent Garden and instead patronising small but enthusiastic and professional companies performing in theatres attached to country houses in the south of England.

Last night, Sunday, we were at Grange Park outside Winchester for Eugene Onegin by Tchaikovsky, arguably the most popular Russian opera.  The performance in the 550 seat auditorium was superb with excellent playing by the Bournemouth Symphony Orchestra and the singing and acting by the principals was of international standard.  One of the other pleasures of this opera are the dance sequences, one in each of the three acts, which gives great opportunity for the costume designer and choreographer to excel, which they did.  This is a wonderful confection of an opera run through with great tunes but, in true Russian style, ends sadly. 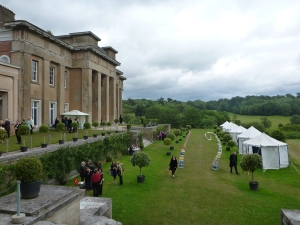 Grange Park is not all about Opera however.  There is the interval when the audience takes their dinner.  Many bring picnics but a select proportion dine in the main house. From the outside it looks like a large country house and was originally owned by the banking family of Baring, amongst others.

However, on entering the main door, you discover that the inside is a completely dilapidated ruin, with bare brick walls, roof beams open to view and netting strung across the ceiling to stop plaster falling on the diners. 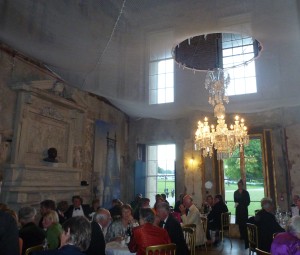 Note the netting suspended from the ceiling.

Here two hundred and fifty of the audience were served a full three course meal of very high quality by a huge team of young waiters.  The service was swift and immaculate and the food excellent.

Our table was on a small landing half way up the main starcase on one side of which the treads were completely missing. 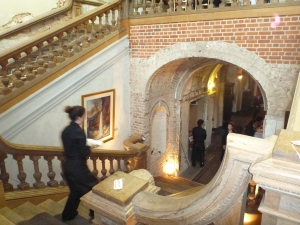 Sadly the English weather served us poorly, being chilly with a strong, very cold, breeze.  However this did not deter either ourselves or the full house of elegantly dressed enthusiasts.