We arrived back in Palma yesterday after an interesting couple of weeks.  Ten days ago we were walking along the jetty in Palma when we spied a beautiful new Oyster 575 sporting an Australian flag.  On further investigation we discovered that the owners, Vicki and John De Margheriti, had both attended the same First Aid course in Sydney as Julie in May this year.  They have sailed their boat from England and called in here en route to the Cannes Boat Show.  We spent a most enjoyable evening with them and their crew in cocktail bars and restaurants in Palma.

Last Sunday we set out to circumnavigate the island of Mallorca, during the week we tested Exotica and she has tested us.  The first day gave us one of the most exhilarating sails we have had so far with up to 30 knots hard on the nose.  The boat sailed beautifully, even under reduced canvas, and was easy to manage with just the two of us, although Julie preferred to steer rather than rely on the autohelm in the considerable gusts. 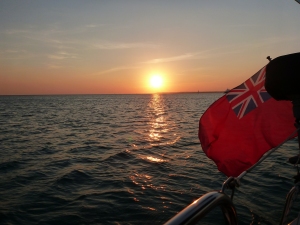 We ended up for the night anchored of Ensenada de la  Rapita, a beautiful long sandy beach, with good holding for the anchor in the windy conditions, although the wind,as always, lightened towards dusk and we had a delightful evening meal in the cockpit.

The next day we rounded Punta Salinas, the most southerly tip of Mallorca and headed up the east coast. This side of the island is flatter and the coast is indented with many small bays although few are suitable for overnight anchoring.  We looked in to Cala Malgraner in the afternoon but there were too many other boats there and not enough room to swing.

Tied up alongside at Porto Cristo

In the evening we put into Porto Cristo where the pilot book told us there would be an anchorage but these have now been forbidden and we had to tie up to the quay at the cost of 112 Euro.  However, we were invited to cocktails with 8 Swiss guys on the boat next to us, had a swim in the Yacht Club pool and an excellent meal ashore in this picturesque small port.

The next day we motored and sailed a bit to the north east tip of the island.  A bit frustrating as every time we rounded a headland and expected the wind to free us a bit it seemed to turn on the nose again. 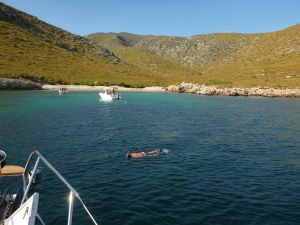 Checking on the anchor at Cala el Calo

We anchored for the night in a tiny bay called Cala el Calo, north of Santa Polenca where we were the only yacht.  We were enjoying a pleasant drink in the cockpit and congratulating ourselves on another pleasant day when we heard a pump start up and discharge water from the stern.  This was most unusual and on investigation we discovered a significant amount of sea water in the main bilge.  There then began a search for the source of the leak and after four hours of mopping out and research in the bottom of the boat we discovered water dripping in from the stern gland, which is the heavy rubber bung around the spot where the propeller shaft exits the boat.  We tried a number of tricks to stop the leak and managed to get it down to a trickle but nonetheless it continues, albeit a very small amount, and will certainly need to be replaced before we leave.

We went to bed in an unhappy frame of mind and this was not improved when the wind turned round in the middle of the night and we found ourselves too close to the beach in only half a metre of water.  This meant starting the engine, pulling up the anchor and motoring out 100 metres before setting it again.  This in the damp and the dark was not much fun.

We left Cala el Calo at first light and it looked like a beautiful little bay in the rising sun.  We had decided to do the whole of the rugged north west coast of Mallorca in one day which meant over 60 nautical miles.

Cabo de Formentor, the most northerly point of Mallorca.

Puerto Soller is the only place to stop all along this coast, but in view of the leak we wanted to be a bit nearer home and so motored almost all day as there was absolutely no wind, the sea was like glass.  We managed to get the sails up briefly through the Dragonera Passage at the south westerly tip of Mallorca and then sailed into Port Andratx where we took a mooring for the night.

This was a peaceful, stress free night for which we were very grateful.

From Andratx, the next day we made the short trip to Santa Ponsa, one of our favorite places, where there is generally plenty of room to anchor, the holding is excellent and the view from the cockpit most agreeable.  We did, however, take a run ashore in the dinghy – (Julie has now mastered the art of managing the Honda 2.3 HP outboard) and found that the town itself is a decidedly downmarket tourist resort.  We hurriedly returned to Exotica.

Finally back to Palma, another glorious sunny day but again very little wind until the final half hour when you are just coming in to pick up the lines in the marina and the last thing you need is a cross wind to pick up the bow of the boat and swing you sideways.  Julie at the helm, however, with the help of the bowthruster is now very expert at getting us into our tight spot and by 5 pm we were safely tied up.  It was then down to washing down the boat so that it looks perfect for our next visitors who arrive on Sunday.