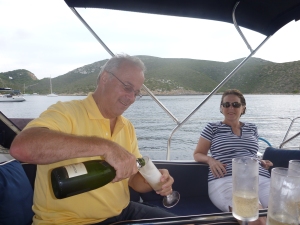 Jane and Hugh Inman pouring the champagne in Cabrera

Last Sunday we were joined by friends from England, Jane and Hugh Inman for four days cruising.  On Monday we sailed to the island of Cabrera on a clear bright day where the wind inevitably seemed to be coming from where we wanted to go.  So we motored and sailed a bit when the wind rose above 10 knots.  The distance is 30 nautical miles which took us about five hours.  We picked up a mooring in this delightful natural harbour which is dominated by an astonishing castle built in the fourteenth century to discourage pirates. 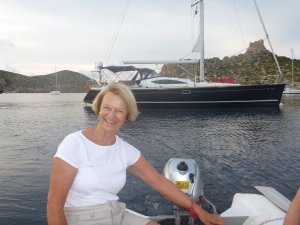 Julie, who has now mastered the outboard motor, drove us ashore in the dinghy to the tiny village on the foreshore where there is only a cantina and a police station and is strongly reminiscent of a Mexican village in a B Grade cowboy movie. 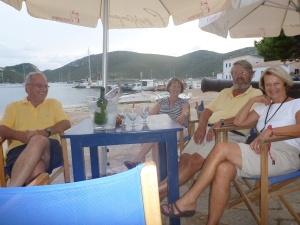 At the Cantina in Cabrera.

We had a bottle of wine there together with all the other yachties who had come ashore. 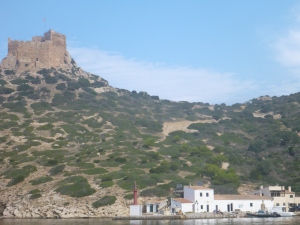 The next morning we climbed the hill to the castle from where there was a superb view of the island, the bay and the south coast of Mallorca.

In the afternoon we sailed across to the mainland and had an interesting night anchored off the long sandy beach at Playa de la Trench.  As evening approached the wind died, and the forecast was for calm, Terry had the bright idea of laying out the kedge anchor from the stern to keep the boat bow on to the waves and thus prevent the rolling which has given us some uncomfortable nights in the past.  This took quite a bit of effort as our kedge anchor is rather heavy and together with 5 metres of 10mm chain is awkward to handle in a small dinghy.  However he managed to deploy it in the correct spot and after a bottle of Moet, an excellent meal and a bottle of wine  we settled down for the night.

Unfortunately the weather had not read the internet forecast and at 5 am a nasty electrical storm blew in and the wind shifted through 180 degrees so that the kedge was now holding us sideways to a strong breeze and was tight under the stern of the boat.  In the dark, rain and wind we tried to ease the line and re-run it but in the end Terry tied a buoy to it and let it go, whereupon the boat rode to the bow anchor and everything was comfortable again.

In the morning, feeling just a little foolish, we retrieved the line and the kedge anchor, although again due to it’s weight it was very awkward to handle and if Hugh hadn’t been there to help I don’t think we could have managed it.  The lessons to be gained from this little exercise were firstly, don’t deploy the kedge unless you really have to and second, buy a lighter anchor and chain.

We had another interesting sail back to Palma with no wind to begin with and then a really good blow from the east which had us running at 9 knots at times, followed by a strong northerly just before entering Palma port and having to negotiate squeezing between boats into our marina berth in a blow.

While in Palma for a visit from the Raymarine rep to change our AIS information and a consultation with Frank, who has diagnosed the drive shaft problem, enjoyed the company of New Zealanders, Philippa and Richard (a late night sojourn in the pub to watch NZ win another 2 America’s Cup races) and dinner in one of our favorite restaurants, Can Eduardo, with fellow cruisers, Monika and Guenter.

We are now into our last week in the Med. and are now anchored in the bay of Santa Ponsa, where we will enjoy our last few days on Exotica.  By mid-week we will be back to clear up and put the boat to bed for the winter.

We do enjoy people’s comments on this blog.  They come to our email inbox and we do not publish them so please feel free to add any comments or your own news at any time.