The storm brewing, once again in Vinisce, our safe anchorage, August 14th

It seems that the only time we get to update this blog is when we are sheltering from a storm.  This is the case at present as we are tucked into a well sheltered bay, Vinisce, near Trogir, with 50 metres of anchor chain down and keeping a close eye on the boats and land surrounding us. 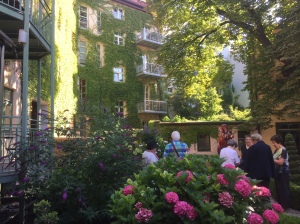 Our trip to Munich was a great success. It was, of course, for the Ring and we were privileged to hear, arguably, the four best singers in the world of the present generation in their respective roles. The first Act of Die Walküre with Jonas Kaufman and Anja Kampe was the best we have ever heard, as was the whole of Götterdämerung with the magnificent Nina Stemme as Brünnhilde and Stefan Vinke as Siegfried.

Dining with Siegfried, Stefan Vinke, and friends at der Katzlmacher, one of Munich’s excellent Italian restaurants

Photo shoot outside the Staatsoper on a very cold evening 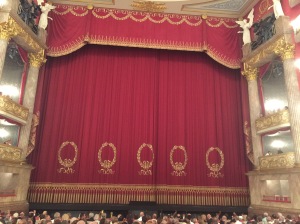 Beanbags on the steps of the opera house 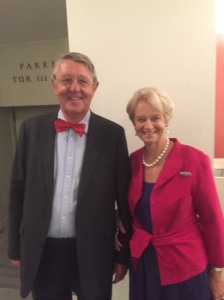 The Clarkes at the opera 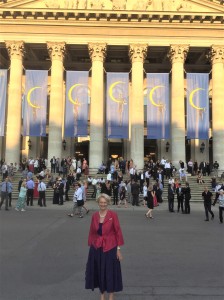 Promenading during the interval 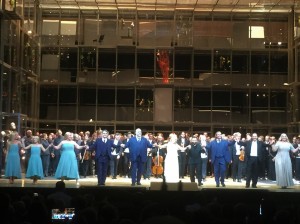 The spectacular cast of Gotterdamerung

On one of the non-Wagner nights we went to Les Vêpres sicilienne by Verdi, an infrequently performed opera but a most enjoyable evening. 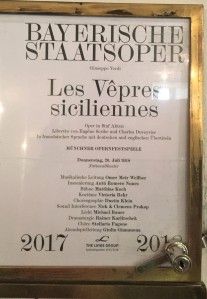 There were many Australians attending this Ring and, coincidentally, a tour group were staying in our hotel which was only a short walk from the Opera House. So, we had many friends to chat with during the intervals as well as our Munich friend Jürgen Lüders who was in town as well. 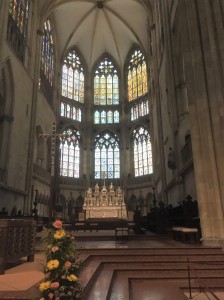 On a day off from opera, we took a tour to Regensburg, a well-preserved medieval city on the Danube, untouched by bombing unlike Munich. 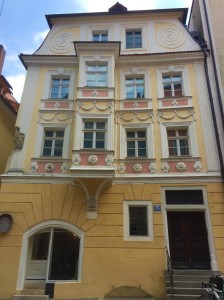 Regensburg was a city of merchants, each wanted to show their wealth by the house they built

This clock tower is empty, it was built only the show it was the tallest house in the city

The Stone Bridge was constructed in the 12th century. For 800 years it was the only bridge across the Danube river in Regensburg and the first in Bavaria 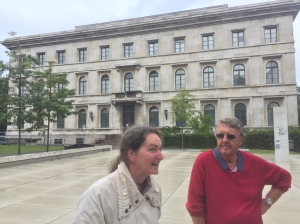 Another tour of Munich was Hitler and the Third Reich, where we walked around the city with a guide who gave us an extended history lesson on the formation and the rise of Hitler and the Nazi party in Munich.  It is interesting to us that Munich appears scarcely to acknowledge its role in the war and the holocaust whereas Berlin appears to have embraced it with many monuments and commemorations. Our guide was quite critical of the Bavarians, not surprisingly, she came from western Germany.

Royal Residenz, heavily bombed during WW11, it has been completely restored

It takes a couple of days to really appreciate the Residenz of the Bavarian dukes, electors and kings from 1508 to 1918. There was a castle on this site in 1385. It houses rooms and art collections from the Renaissance, Baroque, Rococo to Neoclassicism and bears witness to the taste and political ambition of the Wittelsbach dynasty. 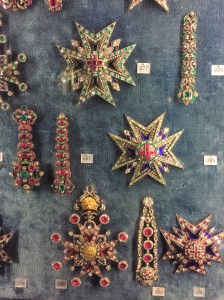 There are 120 rooms to visit in the Residenz, this is the banqueting hall 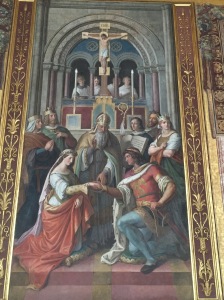 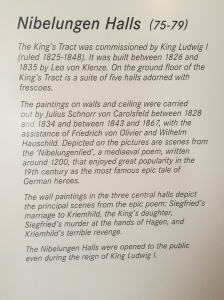 Hardly a wonder that King Ludwig 11 was obsessed with this legend, he was brought up here. 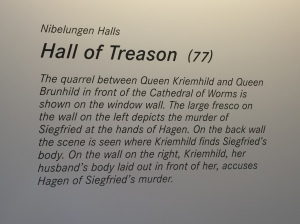 Part of the Nibelungen legend 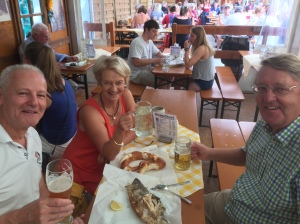 Traditional Bavarian fish cooked on a stick in a very local market, our farewell to Munich with thanks to Jurgen for procuring our Ring tickets

We returned to Kastela on Saturday July 28th. and set off the next day not without as certain amount of trouble.  Terry, unfortunately forgot to cast off the starboard mooring rope which we tore away from the shore on our way out, and finally, having come to an abrupt halt in the middle of the marina, let it go to the bottom.  Luckily there is plenty of room in Marina Kastela, no damage was done, except to his amour proper, but it did cost us 80 Euro for the diver to retrieve it.

Since then we have had, until today, almost continuously settled weather, which means continuous sunshine, light airs in the morning, a stiff westerly in the afternoon and quiet nights.

Dining with the superyachts at Marina Kastela’s Spinnaker Konoba. No, you don’t get to sleep on one of those.

We have stayed in the area around Split and the offshore islands as we have had two lots of visitors, our friends from Munich, Maria and Jürgen, were with us for six days.  They had only ever stepped on a yacht once before, a twilight race with us on Sydney Harbour, and we were concerned that they would find it a bit daunting.  However, the weather was very kind, and we experienced many of the pleasures of this lifestyle including mooring in crystal water on islands and local restaurants where the menu is meat, fish or calamari and the wine is red or white. 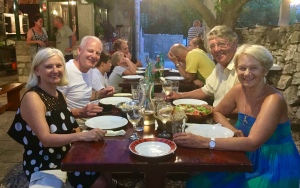 Exotica in the foreground in Stupica Vela, from the Roman fortress

Maria and Julie bobbing the the turquoise waters, bubbly to perfect the moment 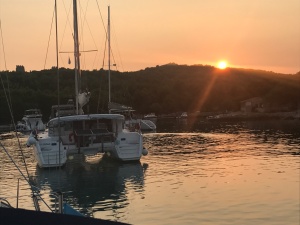 Stayed another night in Zirje 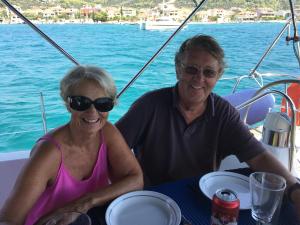 The hosts, after a James Bond pluck from a marina dock after crew arrived in Split

Last weekend Terry’s niece, Philippa and her husband James, flew out for three days. Again, the weather was spectacular and we had some excellent sailing as well as some charming anchorages. 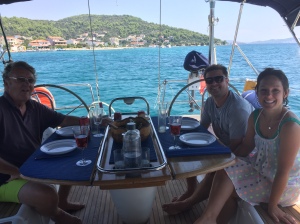 Uvala Poljica,the first of four bays in three days with Phee and James

One of my favourite bays, last visited three years ago, Uvala Krknjes on Drevnik Veli

Champagne while the sun sets in Vinisce 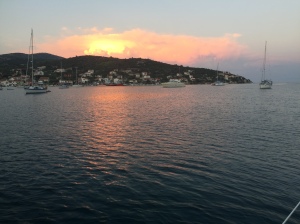 Sunset reflected in the clouds

Before Julie got her hair wet

Farewell to our safe harbour, Vinisce

There were the usual owners blips since our last blog. The bimini, which shades the cockpit, stitching was coming adrift so we paid up front for a sailmaker to re-stitch it while we were in Munich. On our return our perfectly fitted bimini had a corner flapping and the zip broken. Josip swore it was intact when he re-fitted but Julie would not be so easily fobbed off, so he sent his minion along who would have also denied responsibility had our teak deck “nano” guru not been visiting us. He insisted, in Croatian, that it be fixed and returned by 10am tomorrow….and it was. Thank you Albert.

It’s handy to have a chain counter next to the helm when dropping the anchor but this, too, failed. Two electricians took two hours and 800 kunas to do a twenty minute repair. Thankfully, Terry watched the process carefully and will do it himself next time.

This time we really are saying farewell to Vinisce, the calm after the storm

This is the end of our time in this part of the Adriatic.  When this storm abates we will be heading south, checking out of Croatia and picking up our next crew in Montenegro on our way to Albania and finally Greece.

Track of Exotica in Croatia 2018 so far.