The day after Philippa and James left we remained in Trogir Marina and worked on the decks.  To maintain the fine brown colour of the teak we use a two-part solution.  First a UV protective coat and, once dry, a clear Nano sealant.  It takes both of us working all day, somewhat exhausting in the heat but once done the decks look as they did when we bought Exotica.

The brewing storm, once again in Vinisce, our safe anchorage

This time we really are saying farewell to Vinisce, the calm after the storm

As we motored towards the entrance of Trogir bay we noticed very dense back clouds to the west moving quite fast towards us, so our planned sail south to the island of Hvar was changed to the ever secure anchorage of Vinisce. Here we weathered yet another storm comfortably at anchor. A good decision as we heard the storm intensified and by the time it got to Korcula, near Hvar, there were winds of 70 knots with blinding rain blowing 54 foot yachts sideways.

A gentle sail the following day to Hvar, probably the most famous of the Croatian islands for expensive living and wild parties of the rich and famous.  We found a delightful spot with three adjoining bays near Starigrad and picked up a mooring in the middle arm.  During the afternoon a vast charter fleet sailed into the right arm.  We took the dinghy round to have a look and counted sixty-five yachts and catamarans all rafted together, calling themselves Yacht Week.  A brief search on the internet revealed that this was an organised sail in company where the average age was twenty-seven. We expected a huge noisy party but apart from a little bass noise we were not unduly disturbed, or could a short, sharp shower at 11pm have dampened their ardour.

The floating stage in halfway along these boats 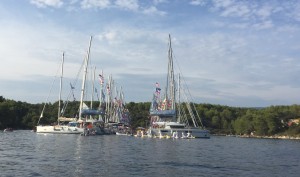 Sail week , thankfully we chose a different arm to this bay 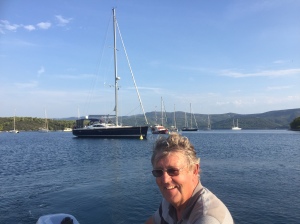 Three years ago we visited the north of Korcula, this time we wanted to see the western coast. 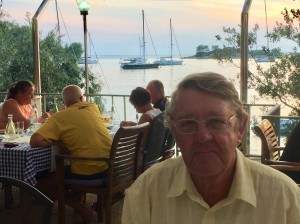 Dining with ones boat in the background

Tied up to Konoba Barbaive, Pomena

We moved on every day to another island and met up with our friends Juliet and Nick Mason-Jones on their yacht Johanem.  We met them first at Porta di Roma in 2014 and have kept in touch, meeting from time to time particularly this year as our plans are roughly similar, we both intend to winter in Greece.  Here we got together at Pomena on the island of Miljet.  We moored stern to at one if the six restaurants on the quay. The mooring is free provided you eat at the restaurant which we did where they cooked great steaks and fish over the wood fired stove.

Exotica from the hotel bar 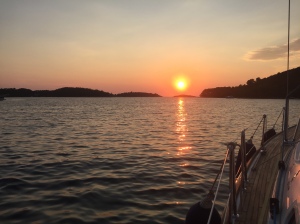 From our dining table

From there we went to the little town of Slano on the Croatian mainland, just north of Dubrovnik, and booked into the marina for the night.  Apparently, the town was completely destroyed by a Serbian bombardment in the Yugoslav war of 1991 – 1992 but has now been rebuilt.  There are, however, still a few reminders of this tragic event.

It was in Slano that we had to make a complete change of all our plans for the rest of the season.  Our intention all year had been to go to Greece via Montenegro and Albania. Unfortunately, the crew we had invited to help us do the trip had to cancel for family health reasons.  We were not comfortable going to Albania where the infrastructure for yachts is non-existent without at least one more experienced sailor so we abandoned that plan and instead decided to cross over to Italy and cruise down the east coast before crossing back to Greece.

En route we stopped in Sipan, a secluded bay with elegant reminders of days gone by. we have fond memories of our night there three years ago.

Renowned Konoba Kod Marka. A table of 10 from a superyacht arrived for lunch at 1300 and left at 1845…..a very long lunch

This storm wasn’t forecast in Sipan

The rain stopped by 8pm, a wet dinghy ride to dinner, which lived up to expectations

And then to Lastovo, the most south westerly island of Croatia and where we could check out with police and customs. 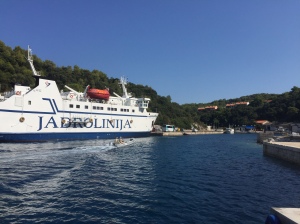 A tight fuel dock at the very end of this bay in Ubli, our last stop in Croatia

The dreaded pontoon that gave us a sleepless night

Here we had an interesting experience.  We had tied up the now disused seaplane pontoon next to the police shed and were permitted to stay the night. It was a calm night and we expected no problem.  However, at midnight a huge ferry arrived and its wake caused a surge on the boat sufficient to break off one of the cleats to which we were attached with an almighty bang.  Julie was not asleep and rushed up to see us slowly swinging round on the bowline towards the rocks.  Dashing about in our night attire we managed to get the engine on and get ourselves back into position and a cat’s cradle of lines to every available cleat on the jetty.  On closer inspection they were all made of a very soft alloy and simply not up to holding any substantial vessel.

The next morning, we called the police at 3.30 am, we were checked out of Croatia by 4.15 am and on our way to Italy.  It was very dark and motoring out of this tiny harbour with two sharp right angle turns, avoiding the considerable shallows, caused some anxiety especially as the aforementioned huge ferry was right behind us but once clear of the island we were headed due south. 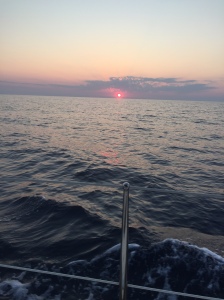 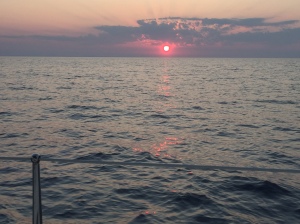 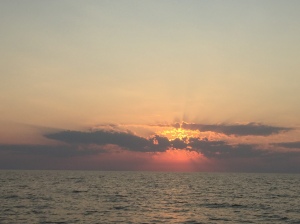 It was trip of 96 nautical miles to Bari where we arrived after thirteen hours of motor sailing across the Adriatic seeing very little other shipping and no wildlife at all.  All the dolphins seem to have disappeared from the Mediterranean.

We had three days in Bari and were joined again by Johanem, who were surprised to find us in Italy rather than Albania. Bari has a substantial old town right on the port. It was of particular interest as a friend’s mother was there in the NZ Nursing Corps from 1943-45. She recalled the ferocious German bombing which devastated Bari and blew up a US ship secretly containing mustard gas, a retaliatory measure in case the Germans resorted to gas warfare. Many seamen were killed and injured but the authorities refused to tell the medical staff the contents of the ship, severely hindering the treatment given. This information was not made public until 1972. 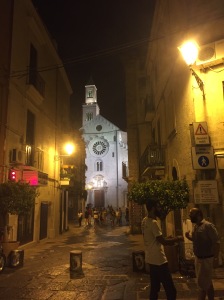 Bari old town from the sea

A fishing boat in the sunrise, leaving Bari

We motored 64nm in nine hours to the next large port of Brindisi. A less comfortable trip as there were storms around which we could plainly see and managed to avoid, although along the edge of them were some strong winds.  We tied up in the Brindisi Marina during a lull. This was the port we departed Italy in June 2015 to Montenegro and Croatia.

Brindisi in sight, a choppy ride 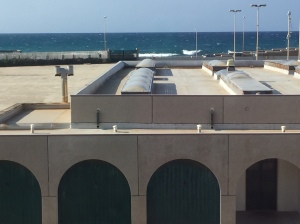 The NW wind from the marina, blowing 30 knots here

Strong NW winds kept us in Brindisi for four days. Johanem caught up with us again for the last night.

Surfs up in Brindisi 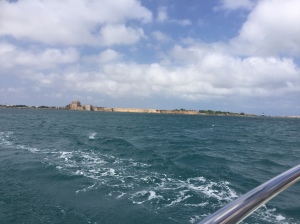 In NW 18-20 and very choppy seas we left Brindisi yesterday for a 30nm run to Santa Foce di Meledugno, a rather uninspiring fishing town with several sandy beaches full of Italians on their holidays.

Italians at the seaside

Exotica protected by the sea wall, enormous blocks of concrete line the sea side

Tomorrow, August 31st we leave Italy at dawn for our final passage to Greece.